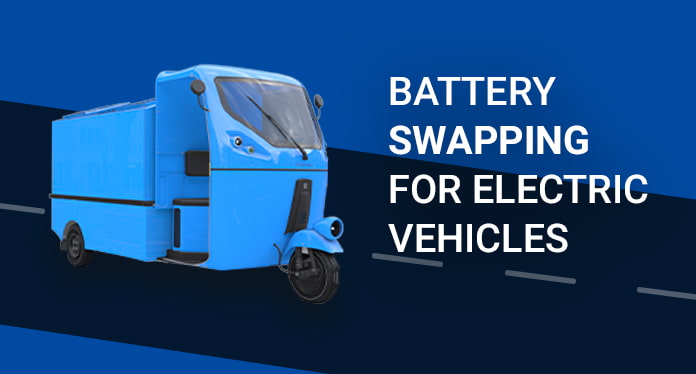 EVs are the future of transportation. But one of the main barriers to widespread adoption has been range anxiety the fear that your battery will run out of juice before you reach your destination. But what if you could simply swap out your battery for a fresh one when it starts running low? That’s where EV Battery Swapping comes in. In this blog post, we’ll explore how Battery Swapping Technology (Ample) is changing the electric vehicle landscape and making EVs more viable for long-distance travel and providing Battery Swapping Stations. We’ll also look at some of the challenges that still need to be addressed before battery swapping can truly take off.

What is Battery Swapping?

Battery swapping is a new technology that allows electric vehicle (EV) owners to swap out their dead or dying batteries for fully charged ones in a matter of minutes. This innovation has the potential to revolutionize the EV industry, making long-range travel easier and more convenient for drivers.

The EV battery swap process is simple: when an EV owner needs to recharge their vehicle, they drive to a designated battery swap station and park in a bay. A robotic arm then removes the depleted battery from the vehicle and replaced it with a fully charged one. The whole process takes about three minutes, and once it’s complete, the driver can continue on their journey with no interruption.

One of the main benefits of battery swapping is that it eliminates range anxiety, which is a common concern among EV drivers. With this technology in place, drivers will no longer have to worry about being stranded without a charge – they can simply stop at a swap station when they need more power.

In addition, a swappable battery electric car is much faster than traditional charging methods like plugging into an outlet or using a public charging station. This means that drivers can get back on the road quicker, which is especially beneficial for those who are traveling long distances.

Finally, battery-swapping stations are much cheaper to build than traditional gas stations, making them more accessible for communities that might not otherwise have access to fueling options. This could be particularly impactful in rural areas or developing countries where EVs are becoming increasingly popular.

Also Read: Are Electric Vehicles Really Better For The Environment?

How Does Battery Swapping Work?

Battery Swapping is a technology that allows drivers of electric vehicles to replace their depleted battery with a fully charged one in a matter of minutes. The process is similar to how you would refuel a gasoline car at a gas station.

There are currently two main methods of battery swapping: automated and manual. With the automated method, batteries are swapped out using a robotic arm, similar to how you would get your oil changed at a service station. The manual method requires the driver to remove the depleted battery from the vehicle and then install the fully charged one.

The benefits of Electric vehicle battery swap are numerous. First, it significantly reduces the amount of time needed to recharge an electric vehicle, which is often the biggest inconvenience for drivers. Second, it allows electric vehicles to have a much longer range since they can simply swap out their battery when it runs low instead of waiting for it to recharge. Finally, it provides a reliable backup option for electric vehicles in case of emergencies or power outages.

The Benefits of Battery Swapping

The Challenges of Battery Swapping

As the electric vehicle market continues to grow, so too does the need for reliable and efficient charging infrastructure. One of the most promising technologies in this space is Electric car battery swap, which allows EV owners to swap out their depleted batteries for fully charged ones at specialized stations.

However, several challenges need to be addressed before battery swapping can become a mainstream technology. Firstly, the cost of setting up a battery-swapping station is significant, and there is currently a limited number of such stations in operation around the world.

Secondly, the process of swapping out a battery is still relatively slow compared to traditional methods of refueling, meaning that it may not be suitable for long-distance travel.

Finally, some EV manufacturers are hesitant to support battery swapping due to concerns about potential damage to their vehicles’ batteries. This means that incompatible charging standards could emerge, making it difficult for drivers to find compatible stations.

Are There Any Electric Vehicles That Support Battery Swapping?

Some of the companies developing battery-swapping technology include:

As more and more companies begin Electric car battery swap stations to explore battery-swapping technology, it’s clear that this could be a game-changer for electric vehicles. Not only would it make EV charging easier and faster, but it would also extend the range of EVs, making them even more appealing to consumers. With so many benefits, battery swapping will likely become increasingly popular in the coming years, revolutionizing the EV market.

1. How long does changing an EV battery take?
The change takes less than five minutes. Additionally, if your trip is close, you can swap out a small battery and rent a big one if it’s a cross-country trip.

2. Is switching batteries preferable to charging?
The preservation of battery health is one of the main advantages of exchanging. Batteries that have been swapped out may last longer, cost less to own, and produce less pollution. My Nissan Leaf’s battery health deteriorates more quickly when it is charged quickly.

3. How does changing batteries in EVs work?
EV users will be able to exchange drained batteries for charged ones at numerous switching locations thanks to battery swapping infrastructure. This eliminates the issue of constructing charging stations and allays drivers’ worries.

4. Does anything need to be reset following a battery change?
Some vehicles require a reset of the battery charging system monitoring system after a battery replacement. A diagnostic tool or specific battery reset tool can be used for this.