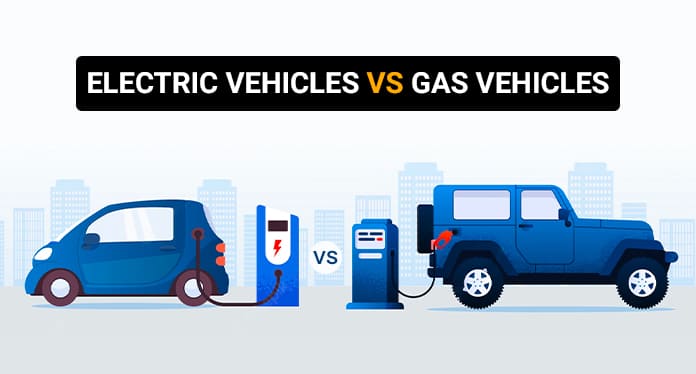 Differences Between EV Vs Gas Vehicles

Unlike a gasoline-powered car, which has numerous moving components, an electric vehicle just has one, the motor. Another significant difference is brought about by the electric vehicle’s reduced number of moving components. The next greatest difference between an electric car and a gas car is in the engines and fuel efficiency. You will always experience less efficient fuel metrics when using gas. The reason for this is that, unlike many electric automobiles, the car is totally gas-powered. The distance that these engines can propel passengers on the road is another way that gas and electric automobiles differ from one another.

When a car is electric, its various parts or maybe all of them are powered by batteries. Additionally, even if you get great fuel economy statistics from this battery, it might also run out of power more quickly if utilized for several simultaneous tasks.

The cost of refueling fossil fuel vehicles is considerably better for the economy since it may raise a nation’s GDP and consequently boost its resources. But for an ordinary individual, the rising cost of gasoline might be a source of outrage, and for them, charging an electric car can be the best choice.

Gas pumps are ubiquitous, even in outlying places, so that is not an issue for vehicles that run on gasoline, whereas an electric charging station is still not frequently available in many places.

An EV requires very little maintenance compared to a gas-powered vehicle since it doesn’t need to replace the fuel pump, timing belts, or lubricant. Regenerative brakes, which use the engine to help slow down the car and so reduce brake pad wear, allow owners of electric vehicles to change their brake pads on their vehicles less regularly. Additionally, because an EV has fewer moving components than a traditional vehicle, fewer things may go wrong, which lowers the cost of unexpected repairs. However, several common maintenance procedures, such as tire rotations and wiper blade replacements, are roughly the same regardless of the engine.

As previously said, both gas and electric vehicles offer advantages and disadvantages. Let’s get into it in more depth.

This claim concerning whether gas-powered or electric cars are better is biased. Individuals hold varying opinions. Gas and electric cars both have advantages and disadvantages, just as it is commonly known that any innovation has both positive and negative aspects to it. Gas vehicles are preferable due to their lower maintenance costs, while electric vehicles are superior from an environmental perspective since they emit fewer emissions. Electric vehicles are the best option, once again in terms of safety.

Gasoline-powered cars still reign supreme in terms of product diversity. In general, buying an electric car is more expensive up front, and it might be difficult to find charging outlets. They do, however, have excellent fuel efficiency. Since they become less expensive over time, they offset their initial expenditures.

1. What is the main disadvantage of electric cars?

2. How long can you drive an electric car?
A battery guarantee that covers it for a minimum of 8 years and 100,000 miles is included with each EV sold in the country. With 10-year, 100,000-mile warranties, Hyundai and Kia go one step further. Additionally, a lot of companies, including Renault, Porsche, and Mercedes, will provide replacement battery packs if their capacities fall below 60 to 70 percent.

3. What happens to gasoline over time?
A proportion of the turbulence will have been lost if the gas is outdated and old. The lighter molecules in the gasoline—a combination of several hydrocarbons—have presumably vaporized or vanished by this point. As a result, the gasoline that is left becomes less combustible and less able to ignite as required.