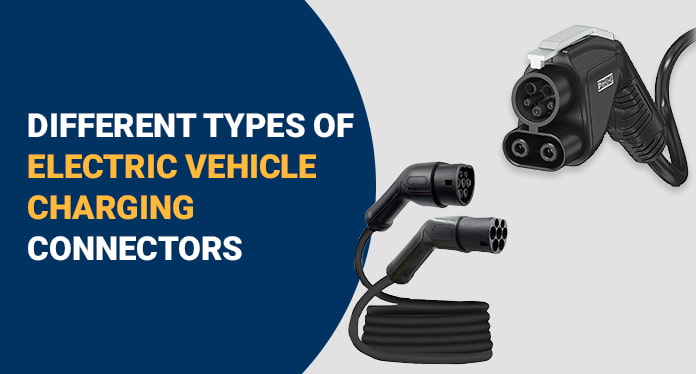 The early days of any new technology are typically difficult and fraught with conflicting standards. Every manufacturer has his own procedures and guidelines that he employs and creates. Only time will tell which will triumph. The same was true of the charging connectors for cell devices, and the same is true now of the Ev connectors on the charging cables for electric vehicles. In this article, let’s take a look at different types of EV charging connectors that are currently available worldwide.

Particularly, there are regional and model-specific variations in the standard for EV connectors or EV charging plugs. Whereas there is debate about universal plug technology, the Combined Charging System (CCS) is supported by a significant number of international manufacturers in the United States and Europe, while Japan and its manufacturers utilize CHAdeMO, and China, which is the largest market for electric vehicles, employs GB/T. There are also several power levels accessible in each location, depending on the type of plug. Let’s quickly explore the various types of EV charging plugs.

The SAE J1772 connection, often known as the J-plug, is used by all electric car manufacturers in North America (apart from Tesla) for Level 1 (120 volt) and Level 2 (240 volt) charging. Other brands cannot use Tesla’s own charging stations without purchasing an adaptor since they utilize a unique Tesla connection. The adaptor cable that Tesla offers with the car may be used to power any JuiceBox charging point.

An electric car may be fully charged in as little as 20 minutes using a DC fast charger, which operates at 480 volts. Because the rapid pace of recharging might adversely impact an electric car’s battery life, it is not advised to utilize DC rapid charging outlets more frequently than twice a week.

The J1772 charging inlet is used by the CCS connection, which also adds an additional pin below. The Association of Automotive Engineers created it and gave it their support. Today, almost all automakers have committed to using the CCS standard in North America. Ford, Kia, Fiat, Hyundai, Volvo, Bentley, Rolls Royce, and other automakers are among them.

The Japanese company Tepco created CHAdeMo. It is the accepted norm in Japan, where CHAdeMO connectors are used by almost all DC fast chargers. Only the Nissan LEAF and the Mitsubishi Outlander PHEV use it in North America. CHAdoMo connections do not share a portion of the connection with the J1772 inlet, in contrast to the CCS system.

Tesla utilizes the same connection for DC rapid charging, level 1 and level 2. Tesla’s DC quick chargers, or Superchargers, are only compatible with Tesla automobiles. A non-tesla EV could not be charged at a Tesla Supercharger station, not even with an adaptor cable. Before allowing access to the electricity, a verification procedure establishes that the car is a Tesla.

Level 1, Level 2, and Level 3 are the different EV charging levels. Since more electricity is provided to the car at higher charging levels, the charging process moves along more quickly. Due to the fact that each EV may take a range of power levels from the charger, various EVs charge at varying rates on each level.

Before the charger is turned on when an electric car is plugged in, there is a communication procedure. In essence, the vehicle checks with the charger how much power it can supply before requesting the maximum amount the station is capable of delivering. You don’t need to be concerned about using a charging station that can supply more electricity than your electric vehicle can manage.

By connecting the charging apparatus to a standard wall socket, any electric car or plug-in hybrid may be recharged on Level 1 at any time. An EV can add between 3 and 5 range miles per hour at Level 1, which is the slowest charging level. Level 2 charging works better for the everyday charging needs of the majority of BEV owners.

For use with a Level 1 charger, the wire that came with your EV is an excellent option. Level 1 adapters are simple to use, affordable, and dependable. Drivers’ demands may be satisfied by a Level 1 charger for a single-family residence. Charge rates for level 1 chargers range from 4-5 miles per hour. They function best when a driver can regularly plug in and leave the car to recharge overnight. Your new car’s components will work with any Level 1 charger.

The SAE Combo (CSS), which is quickly taking over as the industry norm, must be utilized at DC charging stations for all planned U.S. and European EVs, as well as BMW, Volkswagen, Chevrolet, and certain Asian electric cars.

Charging plugs and their speed

Alternating current, often known as “destination charging,” and direct current are the two charging standards. These two fundamental ideas are important to keep in mind:

Using the EV’s internal charger, the current is either changed from alternating (AC) to direct (DC) and then filled into the EV battery, based on the charger type. Or, without the use of an onboard charger, the batteries will simply be recharged using direct current at the DC charging station.

Simply put, an EV battery cannot charge faster than it can support. Even if the charging point’s power is greater than the OC capacity in this instance, your EV won’t charge any quicker since the OC capacity has set restrictions.

Electric cars typically use 7 kW of batteries, while AC charging may accommodate up to 22 kW of charging power.

Although 150 and 300-kW fast (rapid) chargers are also being deployed, 50-kW superchargers are the most prevalent.

Both the power of the charging station and the capacity of the EV’s charging socket determines the battery’s performance in DC chargers.

How do I know which connector my electric vehicle uses?

All electric vehicles utilize the connection that is accepted as normal in their respective industries for level 1 and level 2 charging. Tesla offers a private infrastructure of Supercharger locations that are solely accessible to Tesla automobiles. In order to utilize Tesla Level 1 or Level 2 charging stations, non-Tesla electric cars must have an adaptor, which may be acquired from a third-party seller. No adaptor will function on these stations for DC rapid charging due to the verification procedure.

There are mobile applications that identify every EV charging station that is open to the public and describe the connection or socket type. The industry-standard connection that your EV utilizes will be included with every piece of charging equipment available in your market. It will be the J1772 in North America and the Type 2 in Europe.

1. What does a connection in an EV charger do?
By attaching the electric battery to an exterior socket, it may be recharged. EV Charging Connectors are the terminal connections that are linked to the electric car and the charging cable, respectively, to enable charging.

2. What kind of cable is used to charge EVs?
Currently, mode 3 cables are the most widely utilized for recharging an electric vehicle globally. This kind of charging connection links your automobile to an electric vehicle charging station, which may be located in buildings such as offices, residences, and public and commercial parking lots.

3. Why are there two cords on EV chargers?
These cables connect to your EV on one end and a regular domestic outlet on the other. The cable is equipped with an in-cable control and protection device (IC-CPD), which is in charge of controlling and communicating with the EV while also protecting the regular wall plug.

It’s crucial to understand the distinctions between these different kinds of electric vehicle connectors, regardless of the type of EV you drive. The quantity of electricity that each plug can deliver varies depending on the cars it is compatible with.